Hi everyone!
I recently redid my craft studio to gain some additional table room because I couldn't spread out enough. I also didn't want to spend a lot of money and wanted to use what I had.
I apologize In advance for the less than stellar lighting. I don't get great natural light in these areas. Ironically enough!
Here's a Before shot. 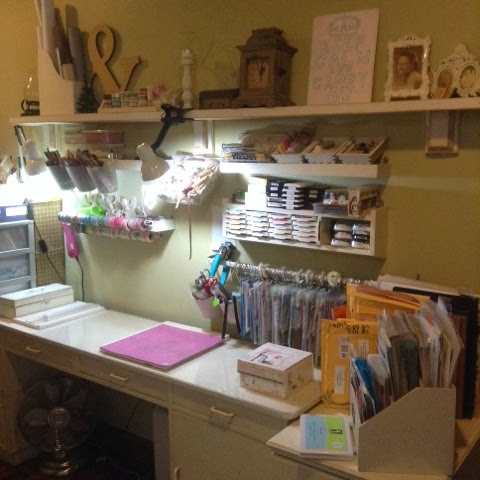 And here's an After.
Simple furniture helped me gain the entire wall where a linen armoire was. 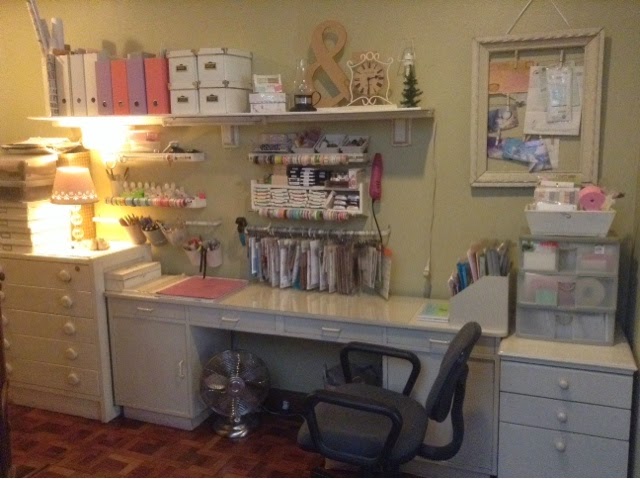 Plenty of room now. I can even transport my stationery supplies here if I want to journal on the table. I used to do that on my bed. 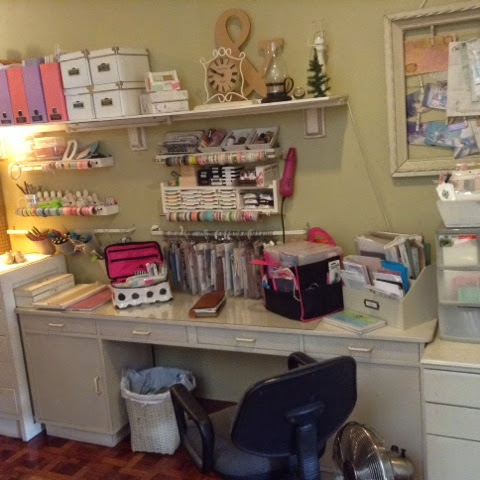 Most of the wall storage is the same. I just added more washi tape storage. I prefer them stored this way because they hardly take up any room. 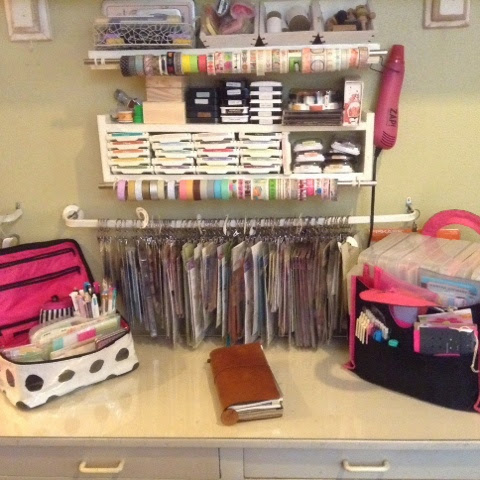 Super simple shelving was put up and it allowed me to clear a lot of things on the counter but they were all still easily accessible. 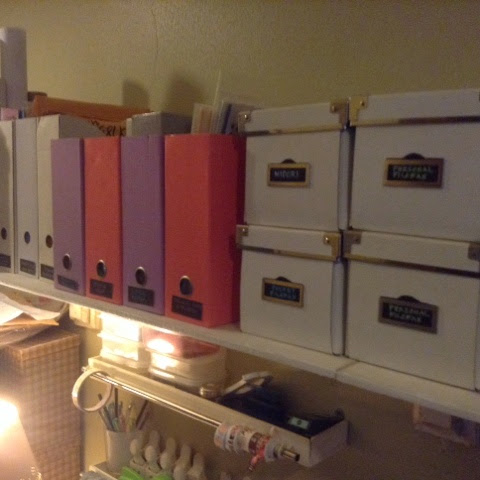 I took out the boxes of planners from their hiding place. 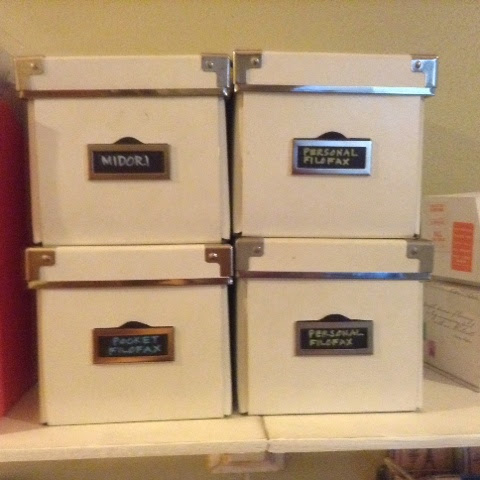 This nook holds office supplies and files in the rolling cabinet. The frame was one that belonged to my grandparents, repurposed and strung with wire and clips.
The drawer system holds handmade cards and other bits and pieces, and the document holder on the left was from my mom. It holds card stock, envelopes, etc. 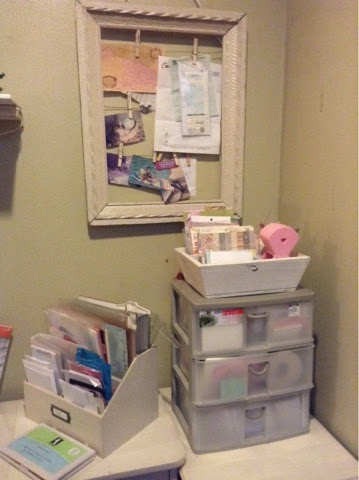 Dollars spent: about $20
A few weeks later, I was inspired to makeover my vanity as well. It needed some sprucing up. The bigger motivation though was that I wanted a pretty desk but as you can see from my craft studio, there's no room for a desk.
Here's a Before shot. Functional, but not really very pretty, and looking a little but cluttered. 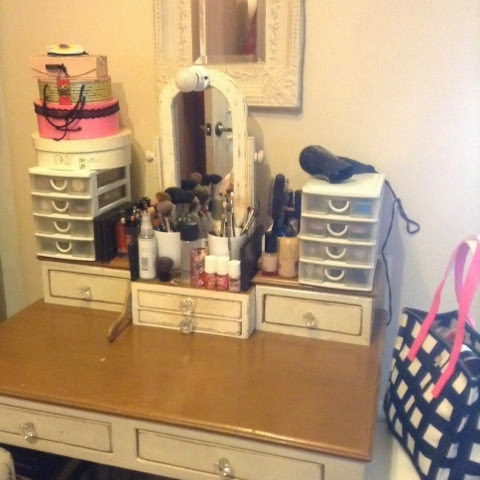 Here's the After. A little bit more streamlined, and functions better as a desk. It also doesn't take away from its function as a vanity. The makeup on the counters is just stored elsewhere but still within reach. 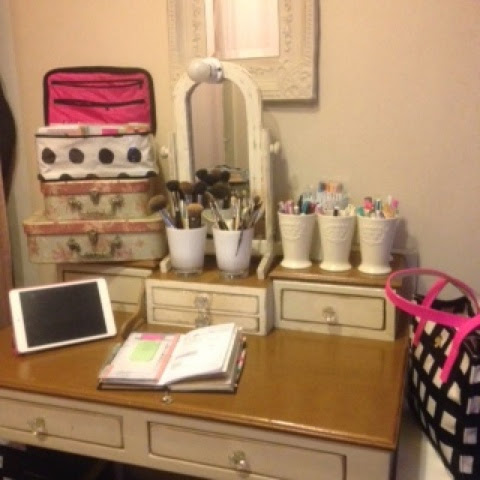 FYI, $0 spent because I already had everything I used.
A close up of the left side. easily transportable planner supplies in the dotted case, and self inking stamps in the floral cases. 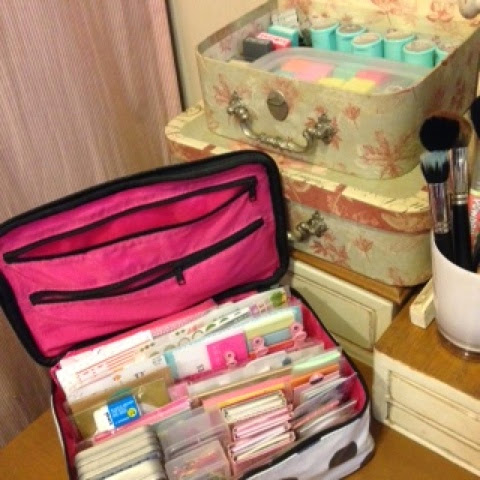 Pens, etc., separated by function in these cups. I've had these forever and use them everywhere. 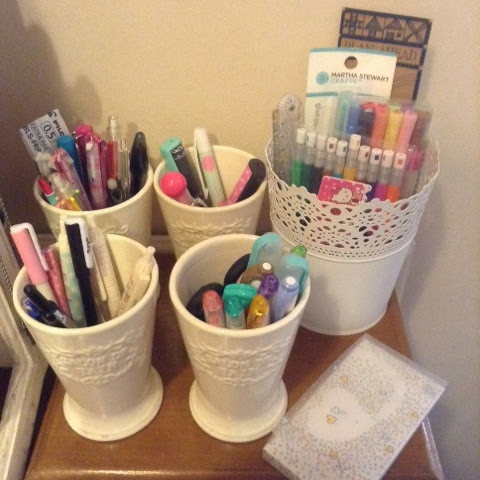 I love it for writing, planning, journaling, without the makeup getting in the way and distracting me. The brushes had to stay where they were though. 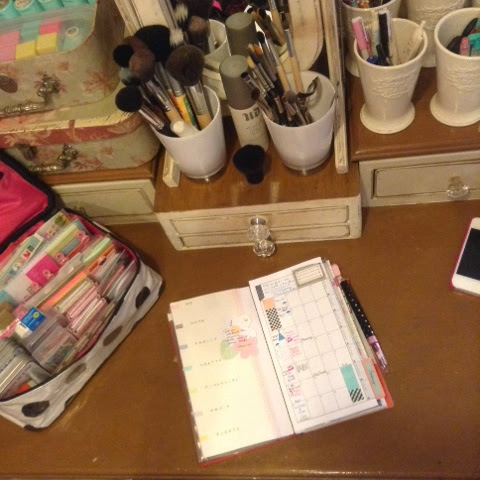 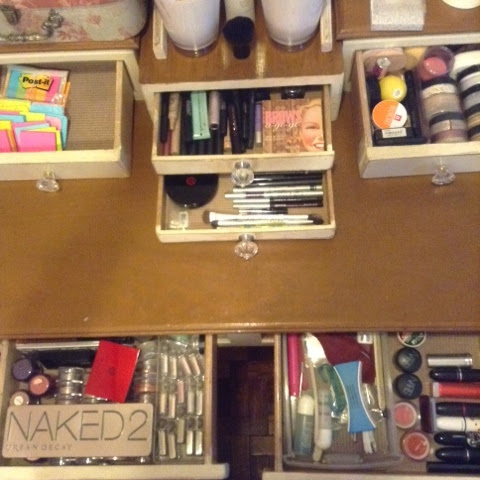 And this 3-drawer system that used to be nail products storage now holds makeup instead. 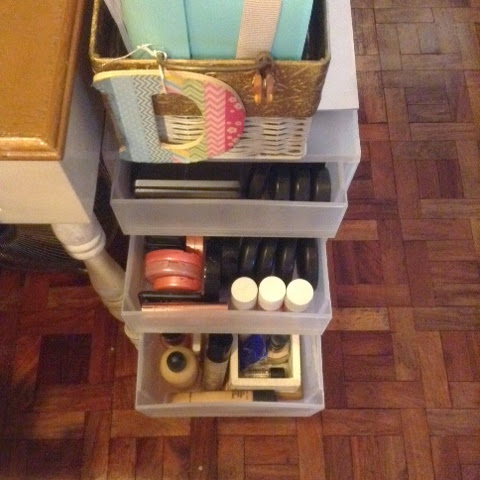 And that's it, my two makeovers. The desk was weeks in the making because I had to work out in my head first what I wanted to do. Once I figured it out though, it just took about an hour
Now I need to find storage for my nail polish.
Thanks for visiting!
Written by Doris at 6:26 PM
Email ThisBlogThis!Share to TwitterShare to FacebookShare to Pinterest
Labels: crafting, Filofax, Kate Spade planner, makeover, Midori travelers notebook, planners, Scrap room, stationery, Storage

~ My idea of Heaven is a library in the clouds. ~