This is really 3 posts in one: (1) settling into the Malden, (2) giving you a tour of my set-up, and (3) a diary update. So heads-up, long post to come!  (:  I'll try not to bore you with too much text and let the photos speak for themselves.

THE MALDEN
I've been Filo fickle lately, flitting from binder to binder without settling on one for more than a few days.  I moved out of the pink Baroque to give it a rest because I've been using it since June.  And then I remembered that I haven't used the ochre Malden since maybe February, so I 'borrowed' it back from my daughter. 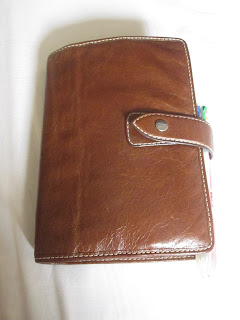 I'm a jeans-and-tee-shirt type of girl. I love wearing boots with jeans when the weather permits.  And the Malden is the equivalent of that.  It's very cowboy! It's like an old worn leather saddle (and I used to ride when I was young so I know, LOL).  It'll take a beating and the more it's used (and abused), the more character it has.

I got it used on ebay so the previous owner had already trained and broken it in for me.  It lies completely flat, the leather is soft and pliable, and it has gotten that leather patina we sometimes crave in our designer handbags.

This is sans the January-August diary pages, so I'm hoping they'll still fit when I get the 2013 Diary. 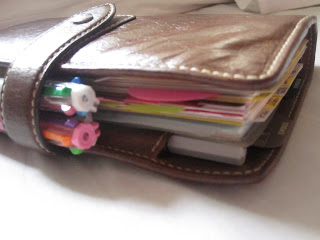 It has also gotten quite creased but I actually don't see any real scratches on it.  And since I'm not precious with my Filofaxes, this suits me just fine.

There are loads of ochre Maldens on Flickr, and I just love browsing them. (Take a gander at the link and ogle those pretty Maldens.)

There's something about the color of the ochre that reminds me of the Old West or the Frontier.  I can imagine generals writing in their leather journals and documenting wars and battles.


Or for a more modern-day analogy, the Indiana Jones of Filofaxes.  (:


The Malden is just so photogenic!

Also, the brown is quite neutral, so my tabs and other doodads don't clash with it.

(I've considered getting a Vintage Pink as a back-up but finally decided against it since I have way too many pinks.)


THE SET-UP
I realized lately that I've never done a complete tour of my set-up.  I felt it was going to be sooo long because of the pictures (my binders tend to be fat and chunky), so I've put it off for a while.  The Malden is such a great backdrop though, with its neutral color, and great leather, that I went ahead and had a photo session.

The front
Since this is a stay-at-home filo, I didn't need any cards in the front.  I just put some flags in the front, a bookmark, and a paper clip.  More for color really, LOL. 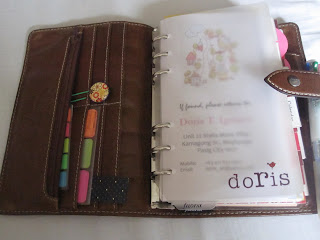 The front is a thick plastic flyleaf I've had for ages that protects my Info Page that I've been doing in all my filos forever.  I rubbed on my name on the front in a brown font with a cute little birdie. 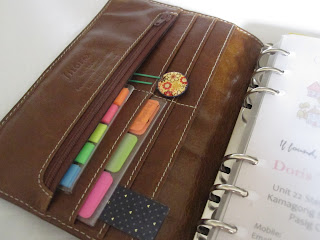 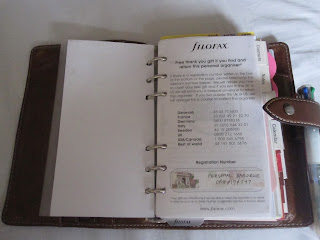 I like having the Return-To-Filofax page with my binder's Registration Number.  I doubt this will ever be useful but I have it in there anyway.  (:


Tab sections.  I use these and may want to decorate them in the future.  I just can't decide on how I want to do that.  They appear here in the order they come in the binder.  Most of the side tabs also have top tabs which I'll show you as well.

Contacts. (no photos for obvious reasons)  (:

Lists. Includes Long-term To Dos, plus top tabs below.


There's also a "Crafts" tab but I forgot to take a photo. 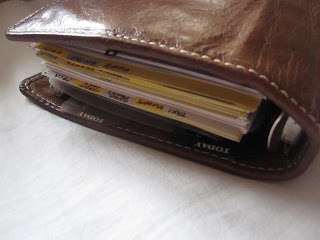 Top tabs
I remade my tabs lately with thin plastic dividers from a bookstore.  I NEED top tabs, and use them a lot.  The ones I had, although pretty and pastel (2 words I love), were made of cardstock, and I was afraid I'd get them tattered really quickly.  I tried to do them all in one color, but they were hard to read, so I alternated yellow and grey instead.  I'm still on the hunt for the same dividers in pastels. 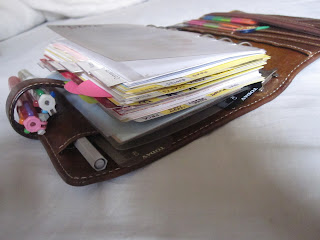 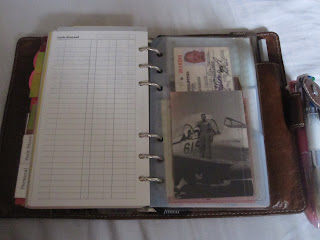 Plastic envelope with photos of two important men in my life. 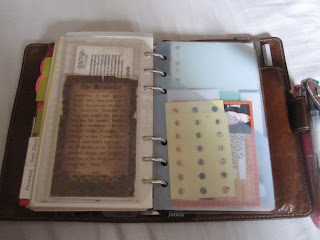 On the left, an old prayer from my mom.  On the right, Daytimer vinyl envelopes.  I love these.  They came with a binder I got off ebay.

Another thick flyleaf at the very back protects all the papers. A ruler and gray pen in the notepad pocket.  I use the grey pen to line my pages manually to create a checklist.

Two Coletos are hooked onto the pen loop.


DIARY UPDATE
I wrote about an experiment I was going to do here.  It worked out well.  I found out two things:  (1)  I love the cotton cream WO2P, and (2) I love the Dodopad.  So it's a tie!  They would both work out well for my diary choice in 2013.  I will probably alternate between the two -- probably!  But I went ahead and ordered the Cotton Cream (because that's what my daughter uses) and will get the Dodopad at a later time.

Cotton Cream WO2P
I was able to fit in non-day-specific to-dos, daily to-dos, appointments.  I didn't think I'd have room for the weekly menu, but I did! This was an exceptionally busy week I think, so there's definitely plenty of room for my 'normal' days. 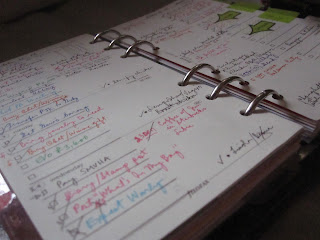 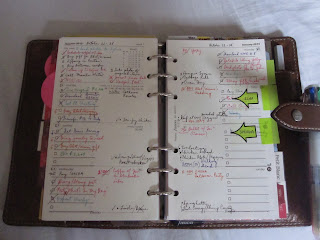 Dodopad
Definitely a lot of room as well. 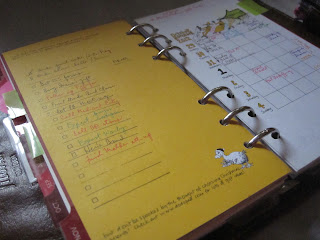 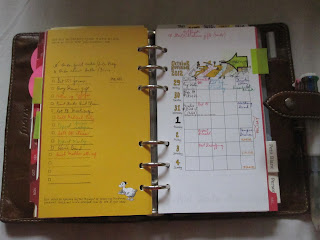 But here's one last shot of the Malden with his baby brother (and yes, I obviously think they're masculine, LOL).