I Created a Convert !

As the title suggests, I have created a loose-scraps-of-paper-everywhere kind of guy into a Filofax convert!

Since about a month ago, my husband started a new job.  He had to get acquainted with a lot of new things, and had loose pieces of paper everywhere.  He was using printer paper (yes folks!) to write on, so, of course, I suggested he use a little notebook instead.

I already had this but had to buy refills for it so we went to the store, got him some, and I moved him into it.

The Malden wallet I got for him 2 birthdays ago.

After a few weeks though, he found it too small for him, and said he needed more pages.  (He was eyeing my Midori, dear readers, so I had to take action.)  And that's when the intervention happened.  I showed him the personal ochre Malden and asked him if he thought it was the right size.  He said he'd try it.  So I moved my pages out of it (I was using it as my Household Binder at that time), filled it up with blank pages (no tabs/dividers, just a bookmark to keep his place) and handed it to him.

He's been using it ever since. 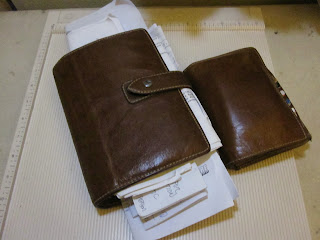 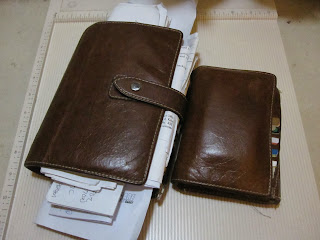 There are still some loose pieces of paper hanging out of it, but he seems happy.  His only concern:  "Is this a real Filofax?"  My answer of course was a resounding "Yes!".

And he is now the proud user of a Malden, maybe my 2nd favorite style of all time.

Which brings me to the 2nd part of the story.  Since he kidnapped my Malden, I moved into my first ever ring-bound planner which I haven't used in years.

And that's it, thanks for visiting!