I had previously been quite happy with the setup of the Filofaxes I used as a wallet.  I tried them all -- a Slimline, a Compact, a Personal, a Pocket and a Mini.  I'd say the best format for me would be the Compact because it was really the 'Goldilocks', just-right, size.  A Pocket works quite well too, having a smaller footprint in my handbag.


However,  I've recently realized that I had very little data/information in my wallet when I was out of the house.  I'd realize it when I would need to either (a) jot something down and didn't have the right section to put it in, or (b) need to reference something that I didn't have.  There was just nowhere to write my musings, whatever they may be.

And that frustrated me no end!

So I fixed the problem.

This time, I chose the pink personal Baroque as my wallet.  It was a pity that it was languishing in a dark box somewhere so I took it out and started stuffing it.


I kept the original major sections in the previous wallet.  I re-did the previous tabs and used some plastic folder material to make them more durable.


But I transported some sections from the home binder that I  reference often, namely, the Blog, Shop, Media, and Business sections.  I used the Martha Stewart note tabs.  What remained in the stay-at-home binder were mostly just very personal and/or financial items.

I have also stopped keeping two Calendars.  As of this writing, I took out January-June leaving only the 2nd half of the year in.  Since I took out most of the lists, the Personal Malden, which used to hold EVERYTHING, has gained some ring space so I moved the Household Binder into it so that everything really is in one place. 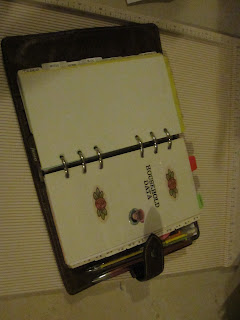 And as a parting shot, my Filofax Team of the moment. In the pretty fanned views.


I should know in the next few weeks if this'll work out for me.  This is the 1st major Filofax re-jig I've done it quite some time so I'm keeping my fingers crossed.  I may also just find it's too big to carry around all the time, but I'm willing to test it.

What Filofax do you use as a wallet?  How has it worked out for you?

Update:  I was waiting in a coffee shop (with my dog) for my family, and was soooo happy with my new setup.  Lists were updated and items checked off while killing time.  It's obviously a little bit heavier and thicker but I didn't really notice the weight on my shoulder.  So far, so good!  (:
Written by Doris at 8:47 AM
Email ThisBlogThis!Share to TwitterShare to FacebookShare to Pinterest
Labels: Baroque, fail, Filofax, fix, household binder, setup, stay-at-home binder, wallet